EYES ON ME. Beauty, intelligence and persistence make up the very basic assets that actress Emily Wickersham has put into use since her debut in “The Sopranos” to her current role in the widely popular series “NCIS.” Without a doubt, she is one of the hottest up-and-coming artists 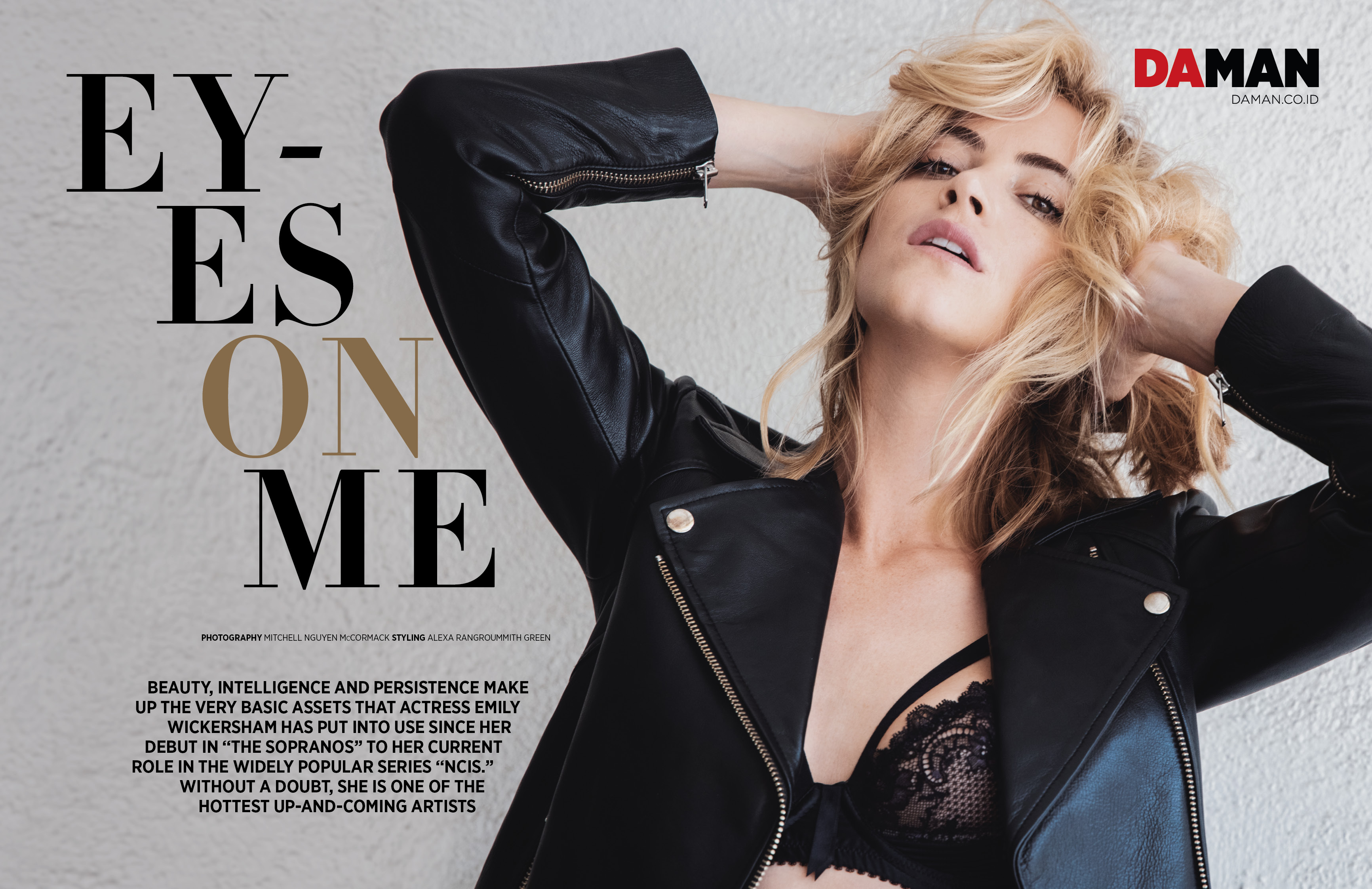 You might not instantly recognize the name, but you’ve probably seen Emily Wickersham appear in several popular TV shows from the last decade or so, as well as in several feature films. But then her character in hit TV series “NCIS” got promoted to series regular, and the world started to really take note of her charm and, more importantly, her acting prowess along with her staying power. In short, she’s the very definition of an up-and-coming artist who paves her own way, step by step, toward Hollywood’s big leagues.

DA MAN: Hi, Emily, great to have you on board. Now, you are definitely a familiar face to the many “NCIS” fans over here. So, how’s the show going so far?
Emily Wickersham: Hi! Thanks for having me. The show has been going great. I’m just starting my third season with these guys. The cast has been so wonderful to me since day one. They are pros and make the job fun. So, so far so good! 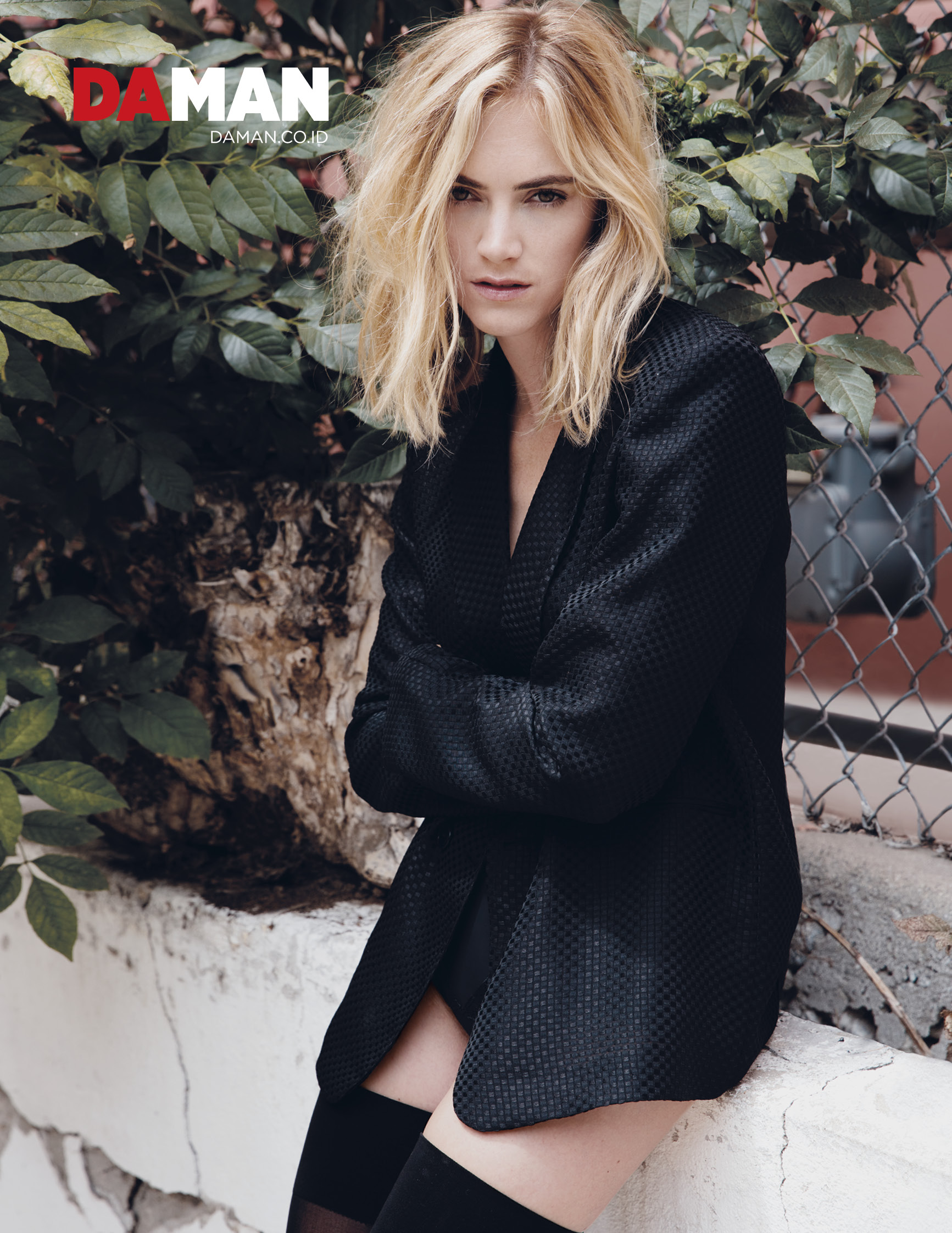 DA MAN: Your first appearance in the show was in an episode titled “Gut Check”. Did it end up being that for you? A gut check, that is.
Emily Wickersham: That episode was pretty intense for me. It was all new and the entire episode was about my character. It was like jumping on a moving train. It’s never easy coming into a show where everyone has worked together for so long, you don’t quite know what to expect. But everyone on “NCIS” from the start was very welcoming and supportive of me. I really lucked out.

DA MAN: By the way, how did you end up joining the show’s cast in the first place?
Emily Wickersham: I auditioned for it. And just like any other audition, I went in and left and put it out of my mind. Then I got the call about coming in to test. Once I got the job, there was a little trial period of a few episodes where I was a guest star to see how I would mesh with the cast. I’m very glad it worked out!

DA MAN: You then joined the main cast in—if we’re not mistaken—your fourth episode and you’ve been part of the team ever since. How has the journey been so far for you?
Emily Wickersham: Yep you’re right. That was when I officially knew I was going to stay. It’s been a really fun show to be a part of. Like I said earlier, it really was like jumping on a moving train. At this point in the game for them, it’s a well-oiled machine. I’ve really learned to pace myself in this nine-and-a-half-month journey each season now. I think it really comes down to pacing and balance. We are on set a lot, almost more than we are home, and that takes some getting used to. But, overall, the journey so far has been great. I get to do what I love and work with many great people and very talented actors.

DA MAN: Your character in the show, Eleanor Bishop, is usually described as a country girl who’s also a “reclusive data freak” with amazing memory. Are there any similarities of personality between Ellie and the real you?
Emily Wickersham: We are pretty different. That’s what I liked about the character. I admire her work ethic and drive. She’s an intense person who’s very smart and driven. Driven to the point of a fault, sometimes. She tends to go so full force into research and facts sometimes that she misses human nuances. Sometimes Bishop needs to be reminded to slow down. I’m more laid back, and I really don’t like junk food. It does the opposite effect on thinking for me, it crushes my brain; for Bishop, it stimulates.

DA MAN: If the show goes on to produce new seasons until the late teens, or maybe even into the twenties, do you think you’ll still hang around?
Emily Wickersham: [Laughs] I mean, it’s a great show to be a part of! This business is so up and down that being part of something like this is rare and special and would be tough to walk away from. 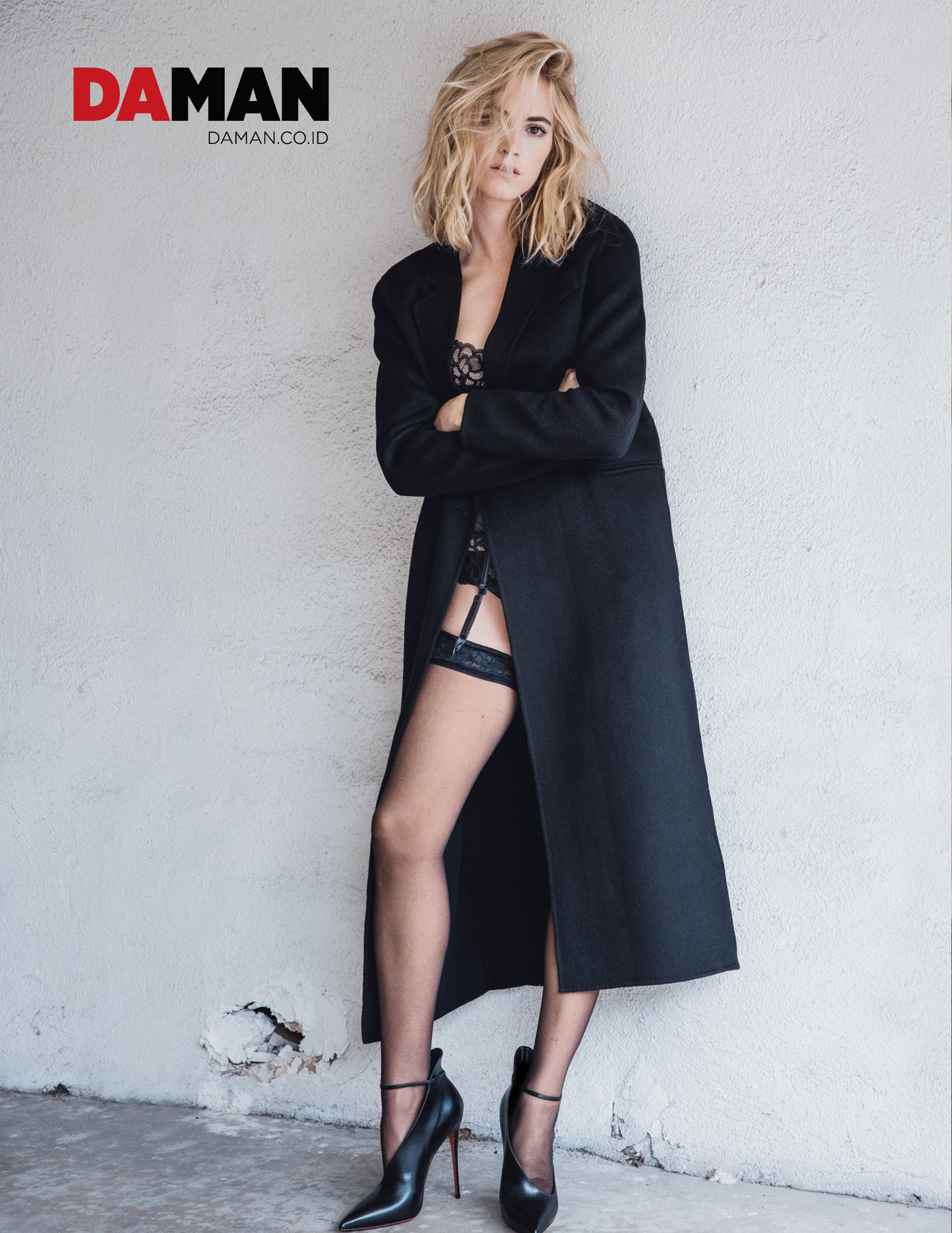 DA MAN: Looking back, you really started drawing attention with your appearance in “The Sopranos,” including in the show’s controversial finale. What was it like working on such a memorable series?
Emily Wickersham: Yeah, it was pretty neat. It was one of my very first jobs, and I even think one of the first auditions I went out on in New York. I didn’t really know what it was like to be on a set, and then I stepped on to [director] David Chase’s set! I remember being very scared and excited to be a small part of “The Sopranos” TV series.

DA MAN: Were there any particular moments that stood out for you during filming of “The Sopranos” TV series?
Emily Wickersham: Having David Chase direct one of the episodes I was in. He created this “The Sopranos” empire and, at the time and still now, the show and the world he created is iconic. It was very exciting and inspiring for me to be a part of the series at the time.

DA MAN: How about from the other TV appearances you’ve done so far? Which ones do you see as very important milestones in your acting career?
Emily Wickersham: It was really fun being a part of “The Bridge.” Getting to work with Annabeth Gish was great. But to be honest, the most important so far has been “NCIS.” It’s been the most consistent job I’ve had, and it’s incredible to be able to get up and work as an actor every day.

DA MAN: If you had to pick one role, one scene or even one line that you’d say is the highlight of your career, what would it be?
Emily Wickersham: That’s hard. I don’t really look at it like that. Each has been very different from the next, and I’ve learned a ton from each experience I’ve had. There have been highlights and low lights. And I guess, overall, the highlight of acting for me is that it keeps you guessing and wanting to get better.

DA MAN: Speaking of which, how did you end up in showbiz in the first place?
Emily Wickersham: I kind of fell into it. I dropped out of college and decided to take classes that scared me in NYC. So, I took acting and public speaking—two things I could never imagine doing because the fear of getting up in front of people scared me so much. After taking classes for a bit, I felt scared and more challenged than I had in my whole life. There was something thrilling about putting yourself out there and failing. It was therapeutic in a way, to let go like that. One day a modeling agent came up to me in a restaurant in Union Square, and I started modeling a bit and then asked if they could send me out on acting auditions. And that’s how it started.

DA MAN: What, in your opinion, are the upsides of being a TV and movie star?
Emily Wickersham: I don’t know if I’d be considered a star, but there have been many upsides so far in my career. The upside that seems to be the most significant is the opportunity to contribute to stories that entertain, inform, and maybe even help people have more compassion for others, even those very different from us.

DA MAN: What is your secret to dealing with the downsides, if any?
Emily Wickersham: I guess one of the main downsides would be the pressure for success and the constant temptation to base your identity and status on that. I think it’s near impossible not to get sucked into that, but I have great friends and family, who keep me grounded and help me see things from different perspectives. 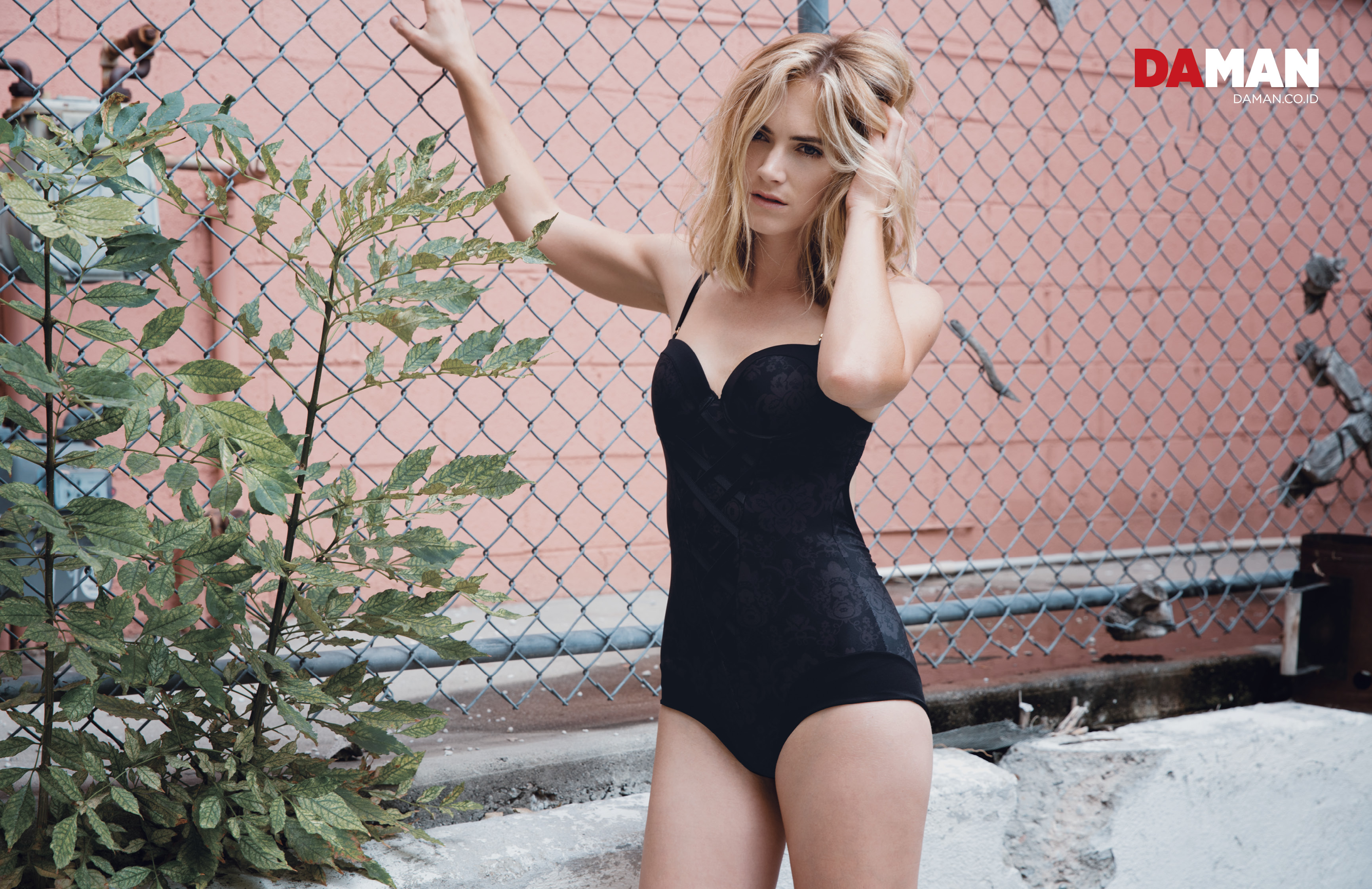 DA MAN: Have you ever thought about what it would be like if back in the day you picked another line of work?
Emily Wickersham: Sure, I’ve thought about it. I might be working at a store or painting in a studio in New York. I think about that movie, “Sliding Doors,” when it comes to this stuff. Like, how different your life would be if you took a different path. I believe that things work out the way they should.

DA MAN: Still, you do have other interests besides acting, right?
Emily Wickersham: I do. I love fashion and the arts. I have a lot of artists in my family and have always loved and feel most drawn to creative environments.

DA MAN: Speaking from experience, what is the best piece of advice for any aspiring young actors and actresses trying to make a name for themselves in your world?
Emily Wickersham: Though my career path is largely due to factors outside of my control and I have a lot of people to thank, including my family, my manager and team, I think persistence was a big factor. I’ve been through a lot of rejection and sometimes I wanted to throw in the towel, but I’m lucky to have very encouraging friends and family, and if you love acting, listen to criticism, learn your strengths and weaknesses, and keep improving, you’ll have a lot to offer and put yourself in a good position to be a part of some great projects.

To see more exclusive pictures of Emily Wickersham, get the magazine here! 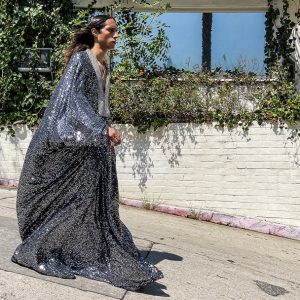 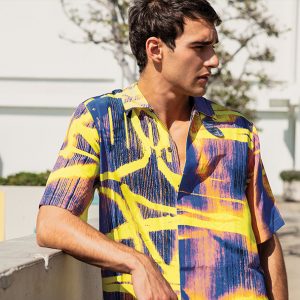 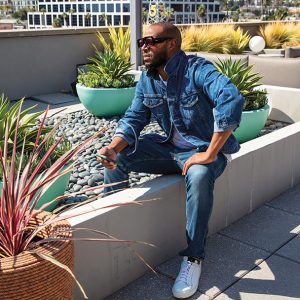