This season’s Paris Fashion Week brings out the best out of the designers—all of whom are seemingly in agreement that the streetwear era is receding at last.

Although the first fashion week was held in New York, the name of the event itself is derived from the French phrase défilés de mode, which literally means “fashion parades” and refers to the ones that were held in Paris couture salons. Way before they were all organized into one big event, fashion shows were held in the City of Light as early as the 1700s: Designers would put their designs on mannequins for the clients to see and purchase. It was that simple.

But now? It’s not just about showcasing designs for buyers to see. No, it’s all about the exposure, the who’s who at the front row, who walked down the runway, collaborations and live streams on various social media platforms. It’s a jungle out there and we need to get the focus back to the designers, the brands and the collection itself.

For Paris Fashion Week fall/winter 2019/20, the biggest talents in French menswear proved that they have the talents and craftsmanship to be in the position they are right now. The new season brought a new approach to gender fluidity as the designers seemed to toy with the traditional male silhouettes,
all the while implementing feminine shapes and styles. It is safe to say that the blurred lines between street and luxury has slowly faded with the structured men’s tailoring that was seen in PFW. It was such a breather to be free from yet another list of streetwear references.

“Hermès unveils well-tailored and high-quality pieces for its menswear collection, with an elegant color palette of blue, red, gray
and orange”

Jacquemus is back in Paris for his second menswear show. The designer and his models arrived in a white truck outside Palais de Tokyo, as if having just arrived from the countryside, then treated his guests to a breakfast feast before presenting his fall/winter 2019/20 collection. The collection was a nod to rural life. The models showcased a workwear jacket, a utility shirt with a delicate wheat sheaf embroidered on its chest, a black style polo collar and a quilted cotton light blue shirt. A voluminous earth-colored corduroy shirt and fresh orange cargo pants added some warmth to the collection, while the accessories included a cross-body leather pouch, leather neckerchiefs and boots with vulcanized rubber edging for the ultimate outdoors mood.

Also coming back for the second time is Virgil Abloh for Louis Vuitton. The crowd-pleasing designer showcased his fall/winter 2019/20 collection on a stage replicating the New York City streets in the music video for Michael Jackson’s “Billie Jean.” But this wasn’t a role call of Jackson costumes. He opened the show with a series of gray double-tailored coats in canvas worn and wide trousers with split folds at the front, while a second double-tailored jacket saw a bomber back sewn onto a traditional blazer. Also seen were monogram quilted puffers in leather or cashmere covered in glitter and world flags—representing the nationalities of his design team—on statement pieces such as pleated skirts worn over trousers. These signaled Louis Vuitton’s stance on diversity and gender fluidity.

Meanwhile, for his luxury streetwear label Off-White, Abloh presented “Public Television.” The collection examined the real-world impact of it titular subject; how the media influences too much. The label’s new line emphasized voluminous tailoring, seen in the oversized classic blazers and casual coats worn over gargantuan faded blue jeans. Winter jackets, wax leather blousons with big jigsaw-piece prints, long coats and enlarged puffer jackets were presented in true Off-White style, with handwritten patterns on everything from boots, tops to pants.

If any model says that they “walked” for Dior Men, know that they’re lying. Each model on the show stood on a moving sidewalk runway and slowly glided past the audience, making them look like products on the 76m conveyor belt. Kim Jones was actually trying to recreate the feeling of a couture salon in a modern way. For his third collection for the brand, Jones expanded on his streetwear sensibility with precision suiting, cool accessories and casual wear that’s comfortable. A couture draping technique was explored in detachable satin scarves worn wrapped around the body and draped over the arm. Textures like fur-print, velvet and suede were key styles to this collection. Everybody loves a good collaboration every now and then. In Valentino’s case, the brand revealed not one but two design partnerships for the season. First was with Birkenstock. Pierpaolo Piccioli teamed up with the German sandals brand for its universality and delivered Valentino-stamped sandals sold in limited stock worldwide. The second is with Undercover’s designer, Jun Takahashi. The two met when Valentino held a show in Tokyo last year and the two designers decided to collaborate on prints that would appear in both of their menswear collections. Takahashi tackled the artwork, which had Edgar Allan Poe as its main theme with time traveler slogans, spaceships, UFOs, skulls and a joint Valentino-Undercover logo. While the artwork is seen on beige mohair sweaters, coats and jacquard trenches, the designs are still very much Piccioli’s. He had been looking into the fluidity of Italian tailoring in the 1980s for inspiration and found a way to integrate sportswear into it. 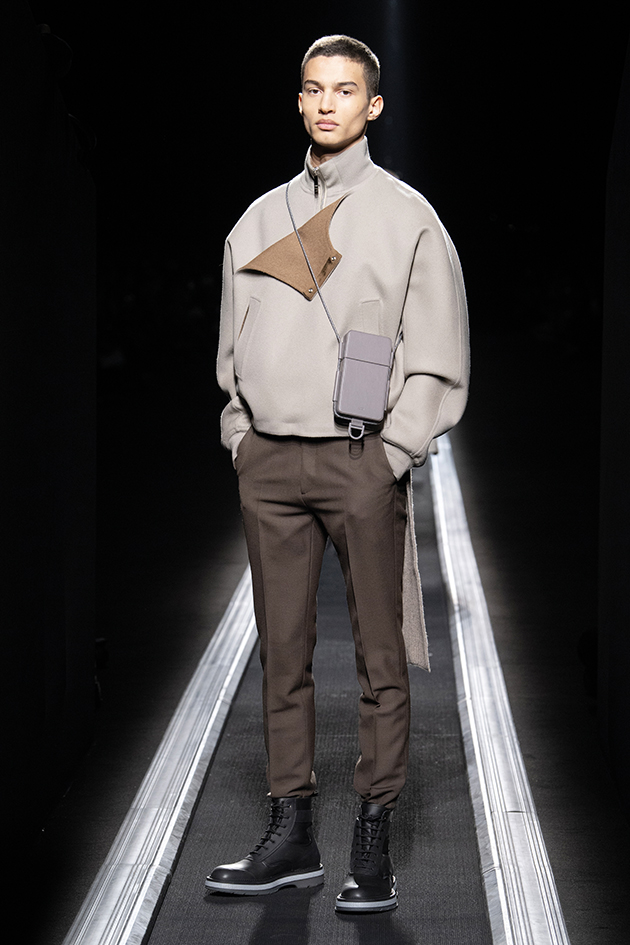 Over at Loewe, things were similarly exciting. Jonathan Anderson’s debut delivered a reminder that Loewe is a luxury leather house. Not just that, there was finally a proper runway show for Loewe, after the brand opted for events and installations for the past few seasons. With Anderson’s expertise and knack for abstracting shapes, the tailoring came with volume in the trousers and asymmetric lapels. There’s this waist-high leather zip-up wader boots that is flapped open, along with a patchwork Liberty print shirt dress, shirts and oversized jumper. Inspiration for the collection? Gaiters and fishermen. Anderson successfully made exciting runway-ready pieces and basic items that stood out.

“Hermès unveils well-tailored and high-quality pieces for its menswear collection, with an elegant color palette of blue, red, gray
and orange”

The energy at Paris Fashion Week seemed to heading in the right direction. And you can count on Véronique Nichanian to administer something that is timeless, classic and luxurious for Hermès. One of the strongest offerings from PFW, Hermès unveiled well-tailored and high-quality pieces for its menswear collection, with an elegant color palette of blue, red, gray and orange. Sometimes, the best way is to keep things formal.

Closing the PFW schedule is none other than Hedi Slimane that showed his first standalone menswear for Celine. Those familiar with his past works would definitely imagine the collection that came out to feature lots of black and skinny tailoring. So, was Slimane’s signature aesthetic seen in this collection? Absolutely. You have to give him due credit for sticking to his guns, though. Black double-breasted suit, black skinny tie, white shirt and models in shades. But then, one by one layered jackets and coats iterating the 1980s vibe came up, accompanied by leather pants, loud animal-print coats that injected some dazzle and color into the collection. That settles it: This is no longer Phoebe Philo’s Celine.