DA MAN Magazine - Make Your Own Style! > Celebrities > International > A Chat with Sam Littlefield of “Batwoman” about his journey in producing and acting

Beyond his roles in various film projects, the actor is a genuine filmmaker with quite a few intriguing projects to his name

Not just an actor, Sam Littlefield is also a writer, producer and director who’s had various memorable roles in television projects as well his own productions. He constantly challenges himself with the roles he takes on in Hollywood and carefully balances taking on mainstream television projects while cultivating his own unique space inside the industry. Examples of the latter include “Mothers Little Helpers” which premiered at SXSW in 2019, “Plus One” which premiered at Cannes Film festival and the critically-acclaimed “Extropia” which was featured on the cover of Los Angeles Times and enjoyed a multiple extension, sold out tour.

DAMAN: Hi Sam, thank you for taking the time for us. How are you? And how’s 2021 treating you so far?
Sam Littlefield: So far, so good. I spent last year acclimating to that new normal; now I’m acclimating to this one.  Last night I went to Seder. It was my first dinner party in a year. It was great.

DAMAN: I’m sure it’s out there already, but what is your “origin story,” so to speak? Where did you come from and how did you get where you are today?
Sam Littlefield: I’ve told this story so many times in interviews it’s starting to feel like a “bit.” But, yeah, my grandma sort of started my career. She had a thick stammer, could barely get through a sentence, but was a great opera singer.  She taught me all about the arts. She told me stories about dining at the rainbow room and being on Broadway. I was transfixed. She taught me about Cole Porter and why Herman Hesse was so great.  When I was eight, I put on a neighborhood production of “The Phantom of the Opera” in my backyard. When I was nine, I wrote and produced this play “How Magic Came To Be” for my third grade class. After that, my teacher, Mrs. Dick, referred me to this local theater company that was putting on the musical “Nine,” and I booked it. So, I guess you could say I was discovered by Mrs. Dick.

DAMAN:  Your multimedia live stage production “Extropia” was critically acclaimed when it debuted in 2010. Do you have any plan for “Extropia” to make a comeback? Virtual shows, perhaps?
Sam Littlefield: “Extropia” was cool. It’s about this technological Utopia where music doesn’t exist and this man who discovers it. We had a full band doing live industrial foley to all of our movements.  I love that show; it’s a real rare gem. We’ve talked about bringing it back, but there are a lot of moving parts. Who knows? Time will tell.

DAMAN: And, now, you’re a part of the DC Extended Universe playing as Mouse in “Batwoman”. Tell us what that experience has been like for you…
Sam Littlefield: It’s been a little bit of everything. The rhythm of producing network television is somewhat foreign to my nature. But getting flung into “Batwoman” taught me so much about rolling with the punches, not being too precious and enjoying the ride. The writers carved out a cool storyline for me. I got to break out of mental institutions that tortured me in just about every way imaginable. I got to confront and murder everyone who’d ever wronged me from my past. I got to go full Shakespeare in a badass poison, betrayal, death scene with my sister. Playing Mouse was like Freud deep diving into Greek theater. I’m pretty grateful I did it.

DAMAN: You also co-wrote and co-produced the film “Mother’s Little Helpers.” Is that something you want to do more of?
Sam Littlefield: Sure. I just want to tell stories. I’ll do whatever it takes to tell them.

DAMAN: You’ve had great performances across several series. Which character is the most memorable for you?
Sam Littlefield: I really loved playing Almer in “The Leftovers.” I have a special connection to that show. It meant a lot to be a part of it.

DAMAN: How about the hardest one?
Sam Littlefield: I was on this pilot that Chris Carter of “The X-Files” was making for Amazon. I had 12 hours of makeup, 10 of those hours I had to stand buck naked. There were five makeup artists working on me all at once. We filmed outdoors at night in the woods and I couldn’t wear a coat, or anything for that matter, because it would’ve messed up the whole thing. I distinctly remember the moment where I was doing this stunt that got a bunch of hay on my back. Suddenly, I feel this tugging on my ass. I turn around and one of the makeup artists is literally picking hay out of my ass crack. I told her: “Um, I can get that.” She said: “Oh, don’t worry honey, I’m using a Q-tip.” That was a moment. I’m realizing I do a lot of gigs that require a ton of makeup. The makeup chair apparently loves me.

DAMAN: As an openly gay actor in Hollywood, how would say have things changed compared to when you started?
Sam Littlefield: Well, back in the day, if you wore a sequin jacket out in public, you would’ve been cancelled. So, it required a lot of editing. Editing all the gay parts out so they could be more digestible to the industry. It’s cool to experience this new found freedom in the public arena. Still, at the end of the day, I don’t want to be identified as anything other than an actor.

DAMAN: Is there anything you’re working on now that we should watch out for in the near future?
Sam Littlefield: I worked on several narrative podcasts during the pandemic for QCODE. The season finale of “Bad Vibes” and the upcoming season of “BLACKOUT,” both on Spotify and iTunes. I’m also working with the “Mothers Little Helpers” team on a new project. It’s about wormholes.

DAMAN: Furthermore, do you have anything like a dream project?
Sam Littlefield: I just want to keep working on cool stories with cool people. I love those moments on set where you look around and you’re like: “Okay, I better step it up. Everyone here is amazing.”

DAMAN:  Since the pandemic started, life has changed for most people. How has it changed for you?
Sam Littlefield: It’s simplified things. It’s made me really grateful for my friends. Last year was so challenging for everyone in so many ways. But in my day-to-day life, I feel like the pandemic gave me a lot of perspective. I’ve reconsidered my relationship to FOMO. My hope is that we all reconsider our relationship to what we’re missing. I hope we all do a better job of focusing on what’s in front of us.

DAMAN: Last but not least, what was the most inspiring, badass or otherwise awesome line that you ever had the pleasure of saying in front of a camera?
Sam Littlefield: Okay, so I’m in this scene where I poison this doppelganger who’s pretending to be my mother.  She takes a sip from her tea, she starts getting dizzy and she says: “Leland, the tea! There’s something in the tea!” My gaze narrows, I get very still and I say: “Lemon and sugar, mother. Just the way you hate it!” Not sure if that falls under inspired, badass or otherwise awesome, but I figure it’s noteworthy. 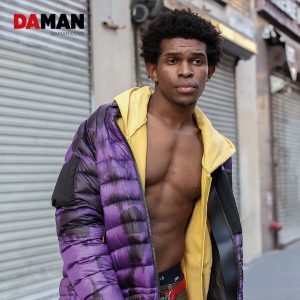