Using the power of sound, The Glenlivet Sonic Whisky Tasting Experience challenge preconceptions about single malt and encourages new perspectives on The Glenlivet 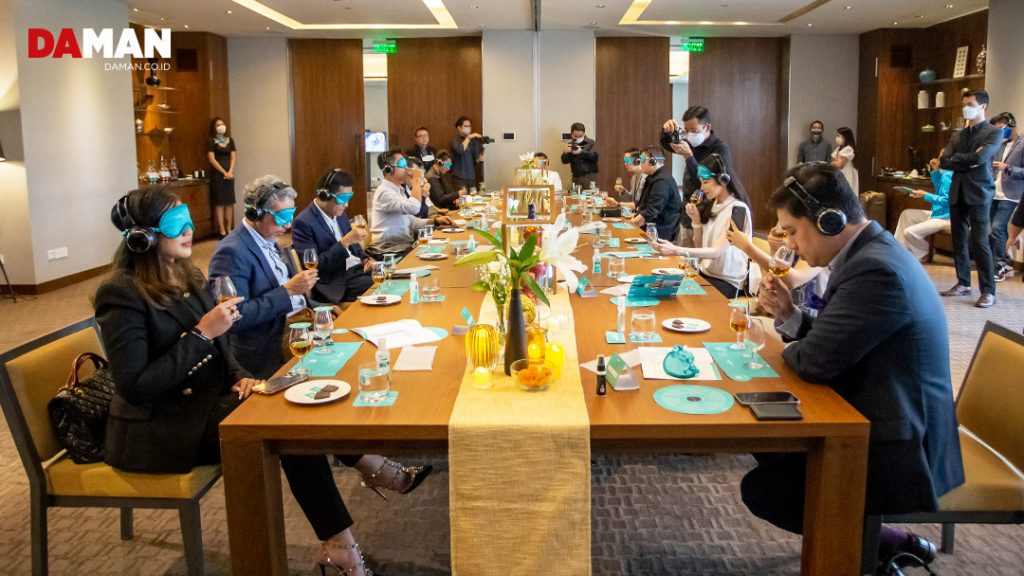 In line with its mission to open up the world of single malt to a new generation of drinkers, The Glenlivet recently initiated the Sonic Whisky Tasting Experience. In essence, this is a brand new experience powered by sound and the senses to open up the world of whisky to new consumers. Designed to showcase the multitude of ways that whisky can be enjoyed, The Glenlivet Sonic Whisky Tasting Experience demonstrates how the myriad flavors and aromas hidden within The Glenlivet can be unlocked and savored by all.

More importantly, The Glenlivet also created a special audio soundtrack developed by whisky expert Dave Broom and the immersive audio experts from Art of Disappearing to unlock the key flavors in the single malt while providing a novel experience for audiences.

Speaking about audiences, DAMAN along with its sister publication Prestige Indonesia were honored to experience the Glenlivet Sonic Whisky Tasting alongside with a number VIP participants at the Residence ONFIVE Grand Hyatt Jakarta in December.

The Glenlivet Sonic Whisky Tasting Experience includes three tastings followed by an extra whisky to toast the day. At each seat, there was a notepad, a pen and a blue “tasting wheel” that pretty much acted as a flavor guide for the participants. Furthermore, everybody at the table were given a set of high-end headphones, a tasting book and a blue eye mask as three glasses with three different Glenlivet whiskies were put in front of them.

Before the actual tasting started, we experienced a brief demo of the effects of sound on taste by using two pieces of the same dark chocolate, presented as Chocolate A and Chocolate B on separate plates. Magically, the slow music brought out the sweet flavors and smooth textures in the chocolate, while the medium speed with lower-pitch sounds brought out the hidden bitter flavors. 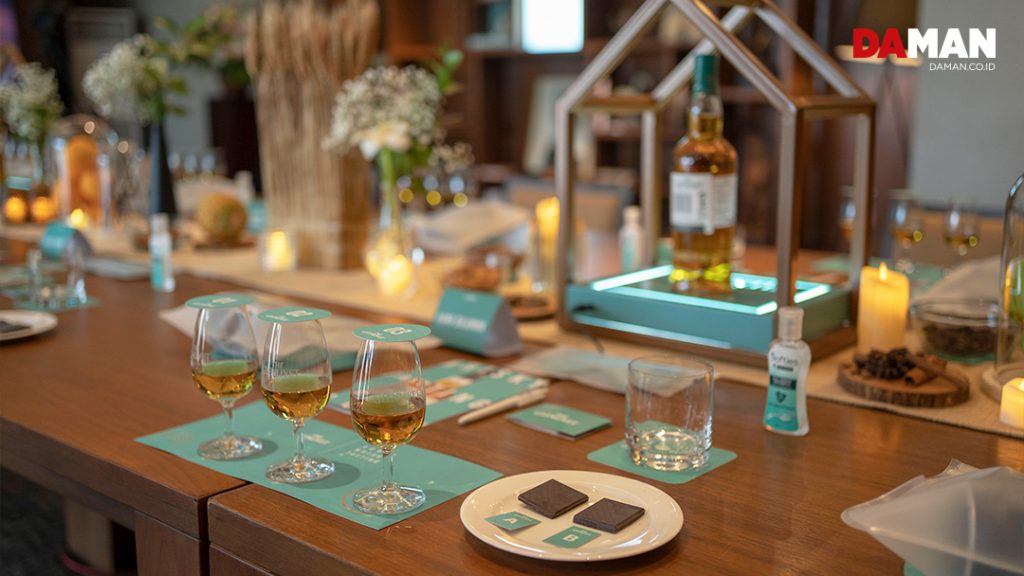 The real experience of the day began with the story of The Glenlivet’s origins, delivered via the headphones. The host of the event then introduced the first tasting, and we tried the first whisky with no music. For the next step, we put our headphones and blue eye mask on, then sipped the whisky two more times with two different pieces of music. Through taste and in the mind’s eye, we discovered how the first bit of music brought the light and sweet flavors, while the second created a contrast to the first tasting.

Moreover, the second part of the audio experience transported us to The Glenlivet Distillery to learn about how the whisky was made. Once again, the host invited us to taste the second whisky with eye masks on and two different pieces of music. After the second tasting, we then discussed the flavors that we discovered; in this case how the first musical piece brought out sweeter flavors, while the second music drew out acidic notes in the whisky. The final part of the audio journey took guests back to the 1930s to learn about Bill Smith Grant and also the signature house style of The Glenlivet. Just like with the previous two tastings, we were once again guided to taste the third whisky with eye masks on accompanied by two different “soundtracks.” Interestingly, the first song which was in a higher key enhanced sweet and spicy flavors, while the second—which turned out to be a white noise from an airline cabin—somehow proved that being in a commercial flight dulls our taste.

At the end of the event, Marc Rosales, Managing Director at PT Pernod Ricard Indonesia revealed the identities of the three Glenlivet whiskies—The Glenlivet 12-year-old, 15-year-old and 18-year-old. He then raised one final toast and led us to the bar to taste whichever was our favorite among the three. Speaking of which, five of the VIP guests (Renaldi Hutasoit, Kama Sulaiman, David Soong, Tantra Tobing and Michelle Pudjiadji) picked The Glenlivet 15 as their favorite, while Diana Sze opted for The Glenlivet 18. 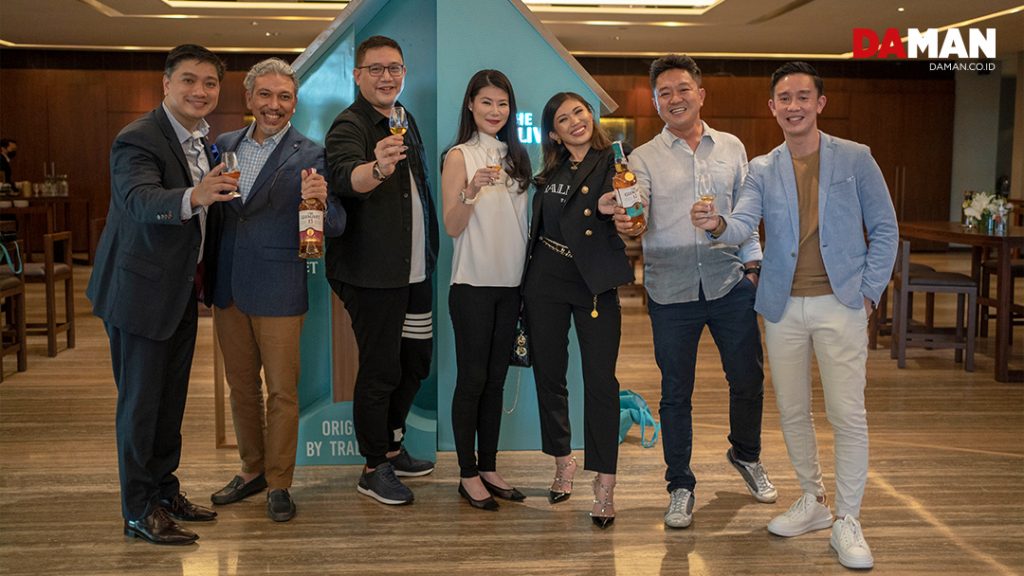 Aside to that, the guests also shared their experiences of the tasting. Case in point: Renaldi Hutasoit notes that he really loves the event as it’s very educational. Diana Sze and Michelle Pudjiadji similarly enjoyed the new concept of the Sonic Whisky Tasting, noting that it’s very unique and truly special in how it demonstrates how the character of a whisky can change when accompanied by different musical pieces.

David Soong deemed the tasting experience to be refreshingly different, while Kama Sulaiman remarked that he had a great time learning about the history of The Glenlivet. Last but not least, Tantra Tobing noted how he felt like his senses were being manipulated (in a fun way) during the session.

All in all, The Glenlivet Sonic Whisky Tasting Experience surely delivers a new perspective on whisky. As we closed our eyes, pulled on our headphones, drew our eye masks and took a sip or two of the whisky, we experienced first hand how sound can bring out different flavors in single malt scotches. We discovered a whole new level of interaction between our senses. In the end, it was definitely an intriguing and immersive experience, as The Glenlivet Sonic Whisky Tasting Experience also showcases how the brand is constantly innovating, not just with their range of whiskies, but also in how they are presented to the consumer.

Learn more about The Glenlivet Sonic Whisky Tasting Experience boutique through the video below: