DA MAN Magazine - Make Your Own Style! > Celebrities > International > One on one with Gavin Stenhouse from the new “Kung Fu”

Growing up in Hong Kong, according to British actor Gavin Stenhouse, shaped the way he approaches life and for that, he wouldn’t change it for the world. At one time, his acting teacher at drama school said that he needed to get rid of his Eastern ways—which made him realize just how lucky he was to have experienced living in Asia. Then Stenhouse moved to England and attended Guildhall School of Music and Drama where he met incredible teachers who taught him everything about acting and the ancient history of acting, a subject that has always fascinated him.

DAMAN: Hi, Gavin. Thank you for making the time to answer our questions. How are you doing?
Gavin Stenhouse: I’m doing great, thank you so much for asking!

DAMAN: Obviously, we’ve been extremely excited about your newest TV show, “Kung Fu.” The original 1972 show was a big hit when it finally came to Indonesia, as was the sequel, “Kung Fu: The Legend Continues.” For our readers who are fans of the old shows but haven’t watched the new one yet, what can they expect from 2021’s “Kung Fu”?
Gavin Stenhouse: Well, I think our reboot has very much kept that sense of the lead character striving for justice. Fighting for the “little guy” against the Machiavellian powers that be. Our show’s creator, Christina M. Kim, has spoken about how keeping that spirit of the original series was so important but there are also important changes that have been made, too. Not only is the leading cast entirely Asian American—besides me!—but the lead character is a badass, butt-kicking woman played by Olivia Liang.

DAMAN: On that note, can you also give us a brief intro to your character and his role in the story?
Gavin Stenhouse: My character is Evan Hartley, an Assistant District Attorney in San Francisco. He’s Nicky’s [Olivia Liang’s character] ex-boyfriend. They were childhood sweethearts, so when Nicky disappears from his life without any explanation, it takes him a long time to get over that hurt. He’s left with so many questions. When Nicky finally comes crashing back into his life, three years later, he’s only just finally been able to move on, with his new girlfriend, Sabine. Ultimately, Evan is happy to have his best friend back in his life but as we soon discover, he’s really not over Nicky, which may just lead to Evan making some rather questionable decisions in order to help her in her quest.

DAMAN: Saying that “Kung Fu” features a lot of martial arts is a massive understatement, of course. So, how do you feel about being the only one in the main cast who doesn’t get to kick ass on screen? Especially since you do have a background in martial arts, right?
Gavin Stenhouse: I grew up doing martial arts in Hong Kong. It was something that I felt was an important part of my identity. I studied Taekwondo for many years but when I moved to London to go to drama school, I dabbled in many other styles, from Chen Tai Chi, Eskrima, Kali and even Silat. Eventually though, I settled on Muay Thai and Western Boxing for some time but after moving to L.A. and getting into rock climbing, I’ve not done any martial arts, so you could say I’m pretty rusty!

Now, with “Kung Fu,” I get to be surrounded by immensely talented martial artists, watch them train, watch them execute the stunt choreography with speed and precision. I’ve always admired the craft of stunt performers. I got to work with some of the Jackie Chan stunt team while shooting a film in Malaysia and that was the first time I saw wire-work up close. How much training and planning goes into each stunt. It’s an incredible art form. The same applies to “Kung Fu.” The way our stunt team plans, prepares and executes their stunt sequences is a joy to watch from the side lines. Besides which, if I were doing half the fight choreography that Olivia or Eddie Liu have to do, I’d end up covered in Tiger Balm and ice packs at the end of each day…

DAMAN: It is kind of easier to imagine the preparation that goes into an action role. What is it like preparing to play a District Attorney?
Gavin Stenhouse: It has been eye-opening. I started by watching court TV online, watching how American prosecutors present their cases. Not being from the U.S., I actually had no idea that a District Attorney is an elected position. Both he and Nicky shared the dream of entering into law with a view to fixing “the system.” Only now that Evan is on the inside does he really understand how difficult and frustrating that task might be.

DAMAN: Critical response and ratings of the show have been great. In your opinion, what is the secret behind the success of “Kung Fu”?
Gavin Stenhouse: It’s been so wonderful and humbling to feel the response from our fans. It’s a highlight of my week being able to “live tweet” with the “Kung Fu fam” and read everyone’s tweets. I think that its secret sauce might just be its heart. Yes, it’s got action, it’s got mystery, romance … but it also portrays grounded characters with real world problems. Relatable problems. It’s timely and it’s heartfelt and ultimately, I think it’s the story being told that strikes a chord with our viewers and endears us to each and every character. We see their flaws … their struggles.

DAMAN: What were some of the best memorable moments from working on the show so far?
Gavin Stenhouse: There have been so many but if I had to pick one it would be during the table read via Zoom for episode four called “Hand” which was written by Kathryn Borel Jr. There is a very emotional scene for Althea [played by Shannon Dang] where she finally confides in Nicky about an extremely painful experience she has had. Shannon had all of us in tears with her performance, even at the table read! We were all left kind of speechless and teary eyed. Olivia ran out of her trailer and the next thing we saw, she’d popped into Shannon’s little Zoom square and they hugged. It was beautiful.

DAMAN: Other than “Kung Fu” season two that was confirmed in early May, do you have any other film projects—planned or already in the works—that you can perhaps tell us about?
Gavin Stenhouse: I’ve been writing a few projects that I’m looking forward to taking the time to get back into this summer. I grew up wanting to tell stories and the process of putting images to paper has always both intrigued and petrified me. It’s something I find hard to do while I’m acting, so while “Kung Fu” is on hiatus, those projects are what I’ll be putting my effort into.

DAMAN: “Kung Fu” is also one of the few major TV series with a predominantly Asian-American cast, which feels all the more meaningful today. All in all, what is your take on the issue of representation in mainstream entertainment forms?
Gavin Stenhouse: I think that representation is everything. Without representation not only do you have large communities of kids growing up without any heroes or heroines that look like them, I also think that poor representation on screen increases “otherness.” It hardens the borders of our implicit biases. It ingrains the racial stereotypes we are fed from an early age. I think that there is a lot of work to do to break down those issues in mainstream entertainment, not just on-screen but off-screen too. Shows like “Kung Fu” can be a good start.

DAMAN: You mentioned about Twitter earlier. How important, useful—or conversely, challenging—can social media be for someone in your line of work?
Gavin Stenhouse: That’s a really interesting question. I have a love/hate relationship with social media. I one hundred percent see the use for it in my business, but I also feel the addictive pull of it when I find myself spending increasing amounts of time on there. It’s a wonderful tool to be able to keep up with friends and see what they’re up to. Especially during these difficult times with the pandemic, when not everyone can see the people they want to see, it’s comforting to be able to maintain a semblance of a connection with your friends. However, if I get to a point where it’s the last thing I’m checking before bed and the first thing I check in the morning when I wake up, then I know it’s time to delete the app for a while. Detox. I think that’s something everyone should do once in a while.

DAMAN: Other than acting, what else are you most passionate about?
Gavin Stenhouse: I love rock climbing. I would say that’s probably my biggest passion after acting. I try to train as often as I can, either getting to a climbing gym or at home with my own climbing specific gym equipment. Having two young kids means that I don’t get to go out and climb on real rocks as often as I’d like to but I’m lucky in Los Angeles, we have quite a few fantastic climbing gyms. I would say sport climbing is my favorite discipline but most of my climbing buddies have either moved away from L.A., have kids or are having kids, so I do a lot more bouldering by myself these days!

DAMAN: And looking forward, what are some of the most important milestones that you want to achieve in the near future?
Gavin Stenhouse: I would like to have the opportunity to do more independent films. I’d very much like to go to some independent film festivals. I’ve been to Tribeca with a film once and I think that Sundance or Cannes would be on my bucket list for sure! 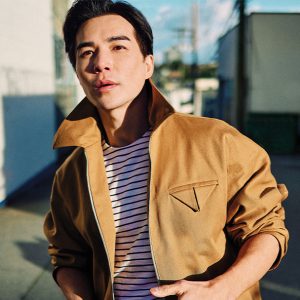 Update A Chat with Ludi Lin about “Mortal...