Hannes Pantli chats with Joezer Mandagi about the time he kept IWC Schaffhausen afloat and how he became the preeminent collector of IWC watches.

While he was instrumental in ensuring that IWC would weather the quartz crisis that shook Switzerland’s watch industry to its core, he also plays a huge part in safeguarding the brand’s legacy—and he does so from the outside, as a collector. In fact, Pantli has an unrivalled collection including hundreds of IWC watches. Or rather, he had such a collection, as now, more than 300 of those has been sold to the brand and reside in the IWC Museum.
Today, Pantli serves as a spokesman for IWC Schaffhausen and also sits in the brand’s board of directors. And, of course, he remains one of the world’s leading authorities in watch collecting with quite a few tales to tell.

DAMAN: You’ve been with IWC Schaffhausen for over 40 years now. What has been biggest milestones from your time with the brand?
Hannes Pantli: My personal biggest achievement is how I saved the company from bankruptcy in the ’70s. There were a lot of changes: New quartz watches were coming, the price of gold went from 5,000 francs to 42,000 francs a kilo, there was the treaty of Bretten Woods that fixed the exchange rate of the U.S. dollar to European currencies. And so, in a short time, our watches tripled in price and export came almost to a stop. Also, we had to downsize from 350 to 150 watchmakers. We didn’t know how we survived.

I remember one day when I was traveling, our finance manager called me and said, “If by the 20th of this month you don’t bring 100,000 francs, cash, we close the factory.” I was in the Middle East then, which was completely new to the western world in 1972. I remember in 1974 it was the first time I was in Dubai. Nobody knew where Dubai was. And the Sultanate of Oman was also not known. So, I started there and I built up the market. The Sultan of Oman became one of our big customers. So were the sheikhs of Dubai, Abu Dhabi and Qatar. And this saved the company. That’s probably my biggest achievement.

DA: What has been some of the biggest changes in the watch industry that you’ve witnessed since those days?
HP: The biggest change, in my opinion, has been marketing. Basically, it’s still the same as when I started: You have to make good products and you have to find somebody that buys it. But what happens in between, this has changed completely. You know, with the Internet now, we do very little print advertising today. Social media becomes more and more important. Or, let’s say, having a boutique-like we have here. Up to—I don’t remember exactly; I think it was up to the ’80s—it was forbidden in Switzerland that a watch factory had its own retail store. Marketing and sales have changed completely.
Watches, as you know, didn’t change much. The metals have changed, the materials have changed, some have become more complicated than others, but the basic technology is still the same.

DA: You’re also known for your incredible collection of IWC watches. How did you stumble on all those unique, vintage pieces?
HP: Well, I found the first watch that I bought, the first IWC, after I had been working for about two or three months at the factory. An elderly lady came with a pocket watch and said that her grandfather bought the watch from a Russian immigrant, who came after the Russian Revolution through Switzerland and tried to sell it because he needed money. And she said: “I have this watch from my grandfather. I don’t know what to do with a pocket watch, but it is a really beautiful watch. I said I would like to sell it now—I’d like to buy a lady’s wristwatch.” So, that’s the first one that I bought and I sold her a wristwatch. That’s really when I started.

What has completely changed, of course, was that in those days you often couldn’t find good bargains. You go to an antique market, you find something and you find a very good price. This, unfortunately, is gone.
Early on, in New York at 47th Street, there are a lot of antique dealers selling watches, jewelry and so forth. And I saw an IWC in a showcase. I went into the store and I was interested, but then I found out it was a fake. And I said, “No, this is a fake.” So, the man from the shop got really angry and he said: “Young man, I was selling IWCs before you were born!” But in the end, we became friends. I told him what I did and then, whenever he and the other antique dealers on 47th Street found an interesting IWC, he bought it and kept it there until I came back to New York. I don’t know how much his profit was, but there I found some really, really interesting pieces. Some of them are in the museum in Schaffhausen, now.

That’s one part of collecting. The second part is that when I travel, sometimes my wife joins me. She doesn’t care much about watches, but she goes around to antique shops—she loves antique stuff. So, when she sees something interesting, she takes notes, takes some pictures and then we go together and look. Just last year I found two very beautiful watches in Vienna.

DA: For you, what is the most emotional part of collecting watches?
HP: I have to say that the emotional part is often how I found the watches. There is one watch we only made two pieces of in 1884. One is lost, we don’t know where it is, and one I could buy, but it took me two years. There was a lawyer with another gentleman who came to the factory with this watch and said they would like to sell it. But they had an absolutely crazy idea about the price. I said I was not interested. But I said, in the near future I would come to Switzerland one day and I will visit you. Perhaps we will find a way. Months later I went to Sicily on business and I visited him and found out he was a really tricky Italian. He said: “Oh, sorry, I just sold it yesterday” and even showed me the check. He then said: “Look, that’s how I got it. But if you want it, I can tear it up. If you pay the same price, you can have it.” It was still much too expensive and it was just a trick. Almost a year later, somebody called me and it was the elderly gentleman who came to Schaffhausen all those years ago. He said: “Look, I’m the real owner and the other man was a lawyer that tried to sell it to me. But now, let’s be serious and tell me how much will you pay, and then we will make the deal together.” Then he came to Switzerland, we had lunch in Schaffhausen and then we made the deal.

“I remember one day when I was traveling, our finance manager called me and said, ‘If by the 20th of this month you don’t bring 100,000 francs, cash, we close the factory”

DA: Are you still excited for new watches?
HP: Yes, especially now. We have new materials which are really fantastic, like ceramic, titanium and then the alloy of ceramics and titanium—Ceratanium—which we have patented. And this is very interesting because titanium watches—we were the first ones who made them when we worked with Porsche. Ferdinand Porsche wanted to have a titanium watch and the Swiss watch industry has never heard of titanium. But Porsche was familiar with it from the racing cars and so we made the first watch in titanium, which was very complicated. Nobody knew how to work it. And Porsche also wanted to have a black watch. There’s no technology that existed to make steel black and stay black. You can make it black, but after a certain time, it becomes gray. So, to make a black watch we had to look for new material and we came to ceramics. Actually, Japan’s industry was leading in ceramics, but we found a corporation in Switzerland who could make first ceramic watches. To make a case in ceramic then cost as much as making one in gold. So, we couldn’t do it for Porsche Design, but we made the first Da Vinci watch in black ceramic and one in white ceramics.

This is very interesting, especially when we find new solutions, new ways of producing. When you look at watchmaking, it is a very, very old trade. Basically, the mechanics of the watches are the same. They were bigger before, and then they got smaller and smaller. But it’s basically still the same.

DA: Is there a disconnect then between this very, very old trade and the new generation of today?
HP: It’s easier to find young apprentices to learn the trade of watchmaking. We have 24 apprentices who learned in Schaffhausen at the factory. It has become a very respectable job again.
What the future is concerned—of course, everybody is asking what do you think about smartwatches and things like that. I mean, they’re certainly valid products, there’s no doubt about that. But how often do you change your iPhone? Would you pay 10,000 dollars for an iPhone and change it in two years? So, I think, in this way, it is not a competition. Because you don’t buy a watch to know what time it is. 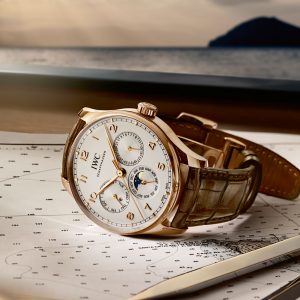 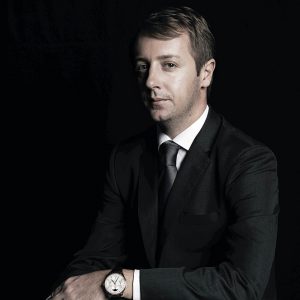 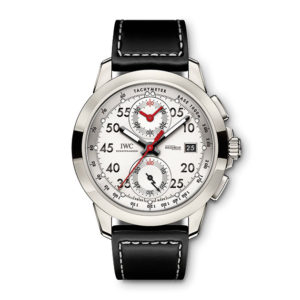 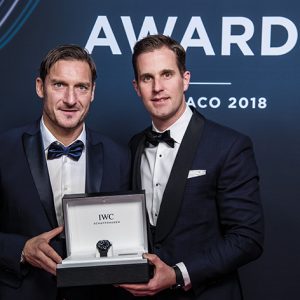 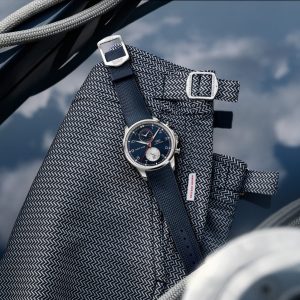 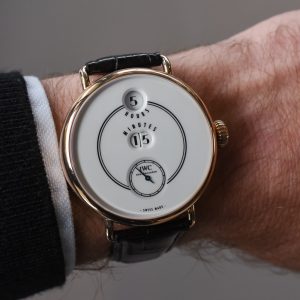 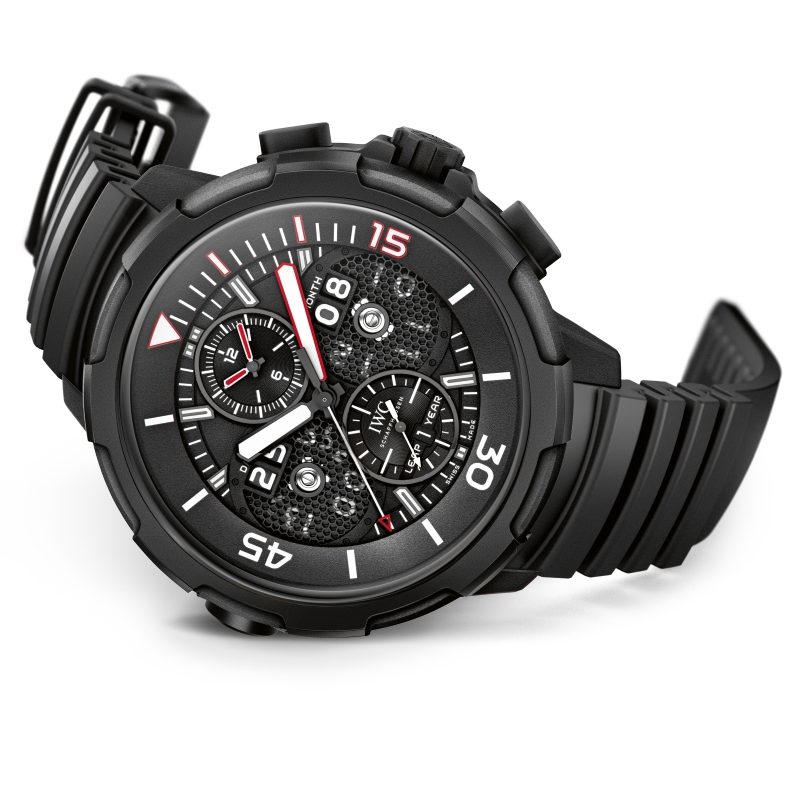