THE ALPHA MALE. Known for his signature scar and intense gaze, model Tobias Sørensen has fronted a number of editorials and campaigns with such a virile appeal. He shares the good and the bad of his modeling venture with DA MAN Denim jacket by AKA545, shirt by Prada, hat by Minnetonka Moccasin

Within the fashion industry, a model is not always applauded for having a perfect body or flawless appearance. Sometimes, imperfection becomes the most sought-after quality because what people see as flaws can be captivating when captured by the lens. A case in point is Tobias Sørensen, who, despite having an eminent scar on his face, has walked numerous runways and starred in a bevy of notable campaigns. There are even quite a few of his admirers who feel that the scar punctuates his virile appeal. And it is not hard to see why: With his signature intense gaze and the fluid way that he embodies the image of various different brands, Sørensen navigates his way through the highly competitive modeling world with remarkable ease. Furthermore, if someone’s Instagram account can be taken as an indicator of that person’s style and personality, then this model definitely knows how to dress well and how to have fun. 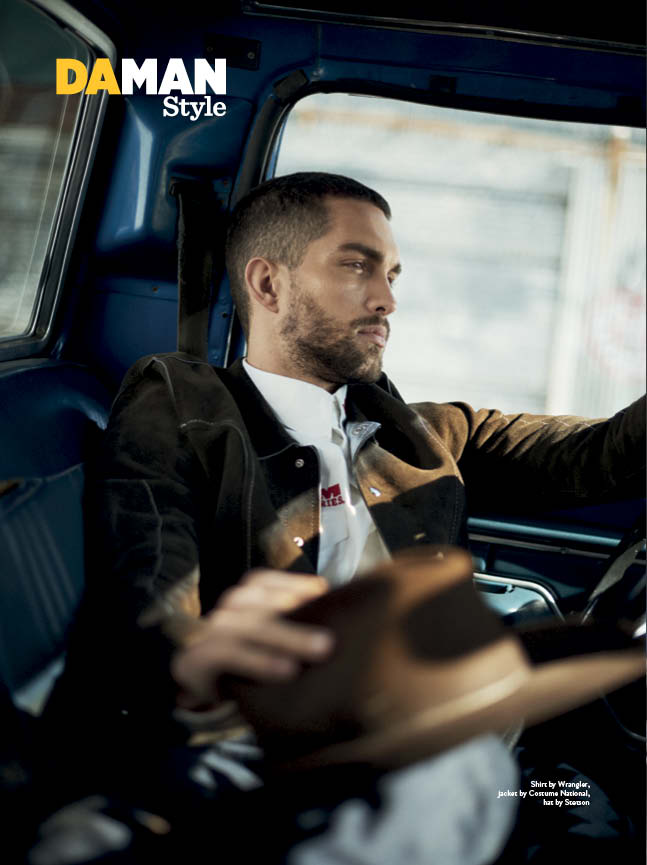 Shirt by Wrangler, jacket by Costume National, hat by Stetson

DA MAN: Hi Tobias, what keeps you busy these days?
Tobias Sørensen: Moving in to my new apartment with my girlfriend, Jasmine. But other than that, the usual stuff: work, gym and enjoying life.

“Communication between the photographer and model is equally important”

DA: How and when did your career in modeling start?
TS: An agent from Elite Copenhagen approached me at the clothing shop I worked at. At first, I didn’t really think modelling was something for me, but he convinced me that I had potential and I could earn some decent money. Straight after signing up, I flew to Paris and did Dior … and suddenly it started.

DA: From Kenzo to Hugo Boss to Belstaff, you’ve done quite a few campaigns for various brands. What is your approach to embodying each brand’s image in your work?
TS: I always look into what the brand is about, for example through its history, or the feeling and energy in earlier campaigns and such. At the photo shoots I try to be as involved as a model can be; I’ll look at the mood board and try to channel that feeling. Communication between the photographer and model is equally important. 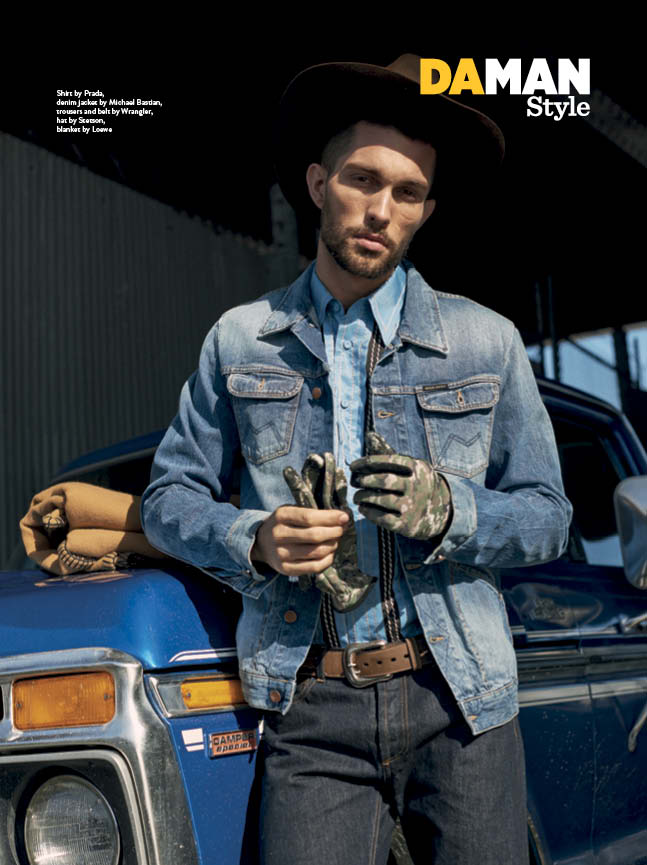 Shirt by Prada, denim jacket by Michael Bastian, trousers and belt by Wrangler, hat by Stetson, blanket by Loewe

DA: At the same time, you are working with different teams for different photo shoots. How do you constantly adapt yourself to working in all of those different environments?
TS: As a model you quickly learn to become social and present yourself well.
I make an effort to try to talk to everybody on set and show interest, professionally, for what’s going on around me.

“My style depends on the environment that I am in. My mood also plays a part in my style”

DA: Imagine if you could select your own dream team for a campaign shoot. Name some people you’d like to work with.
TS: That’s such a hard question to answer as there are so many talented people in the business that I truly respect all that they have accomplished. But the few times I’ve had the opportunity to mix business and pleasure with my girlfriend Jasmine have been amazing. Actually we are coming out in a campaign together sometime in March it’s going to be great. 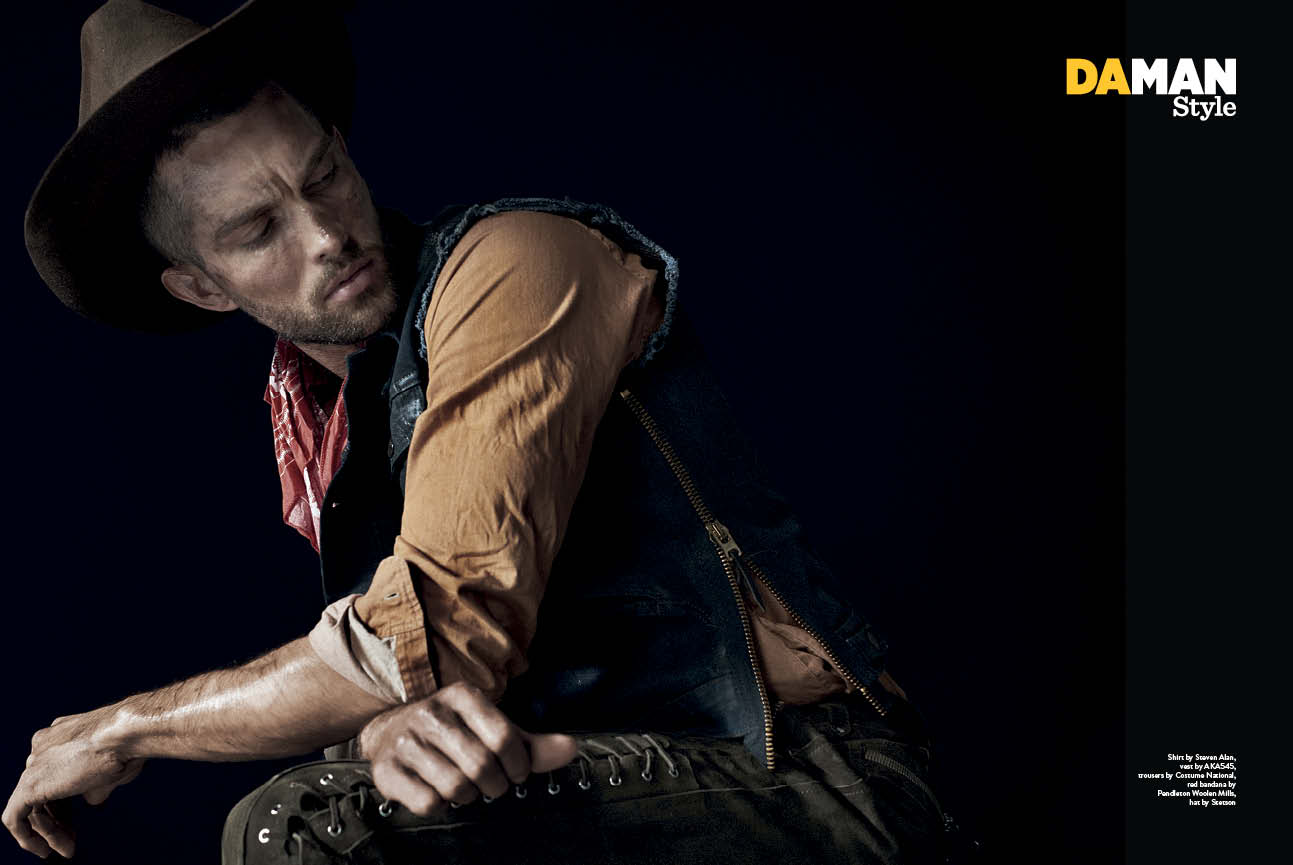 Shirt by Steven Alan, vest by AKA545, trousers by Costume National, red bandana by Pendleton Woolen Mills, hat by Stetson

DA: What was the most daunting modeling project that you’ve done so far?
TS: The most daunting was an A-list brand underwear campaign. They wanted me to shave off more or less everything … only for them to decide that they didn’t want to go for the smooth look anyways. 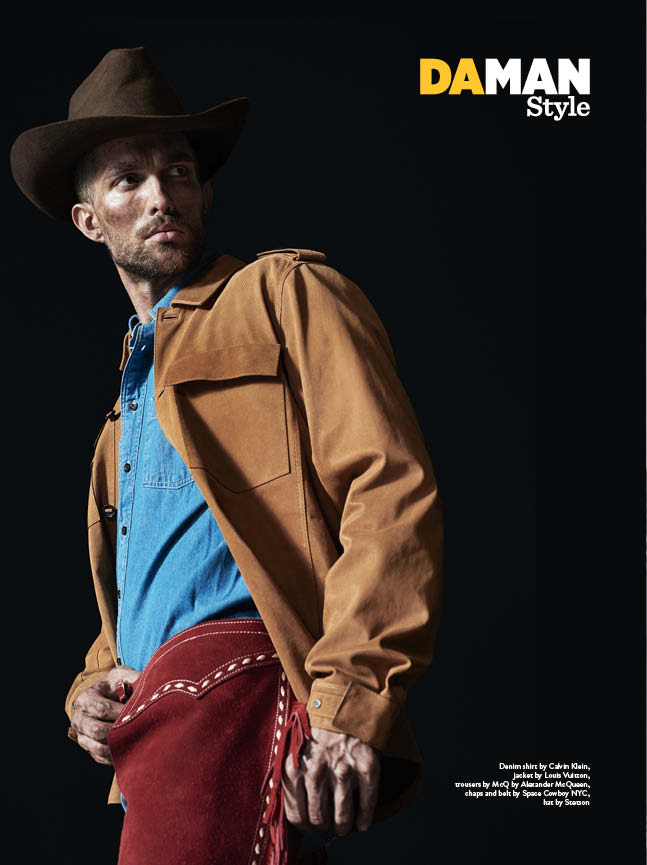 DA: In an interview we conducted with Garrett Neff, he mentioned that it is hard to have a relationship because he is constantly traveling. What about you?
TS: For me it’s not how much time we spend together, but how we spend our time together and being able to appreciate the small things. I guess those two things are the key for me. 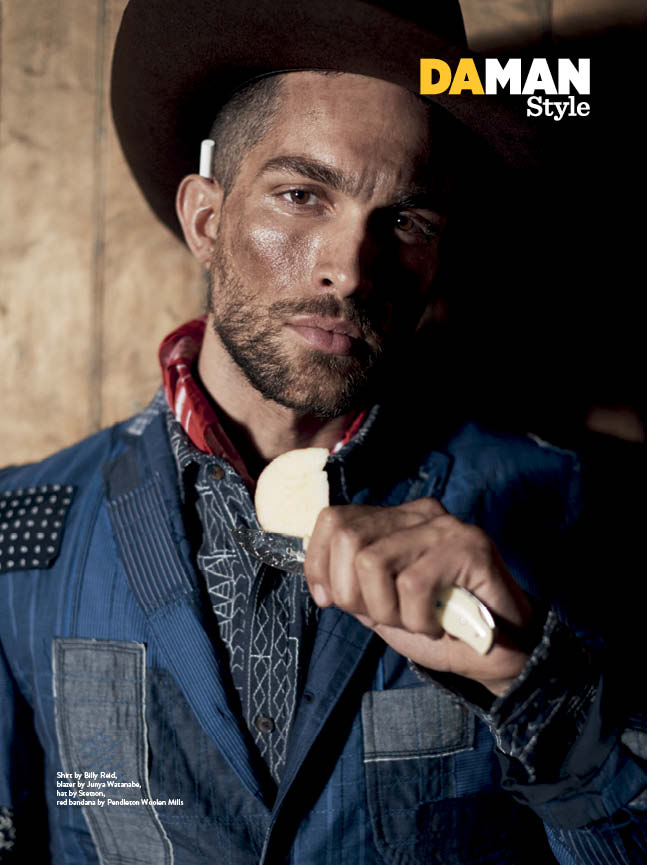 DA: In your opinion, what are the ups and downs of being a model?
TS: As every model would probably say: Being able to travel the world and see places we never would have been able to see. The downs are definitely being away from my family and the people that I love as well as the waiting time! We spend a lot of time waiting and waiting and waiting, and then we still have to wait a little more.

“For me it’s not how much time we spend together, but how we spend our time together and being able to appreciate the small things”

DA: Do you want to explore other aspects of the fashion industry besides being a model?
TS: I really appreciate what I am doing right now and hopefully I can do it for many more years. But modeling isn’t forever, so starting up my own business at some point is on my mind for sure. 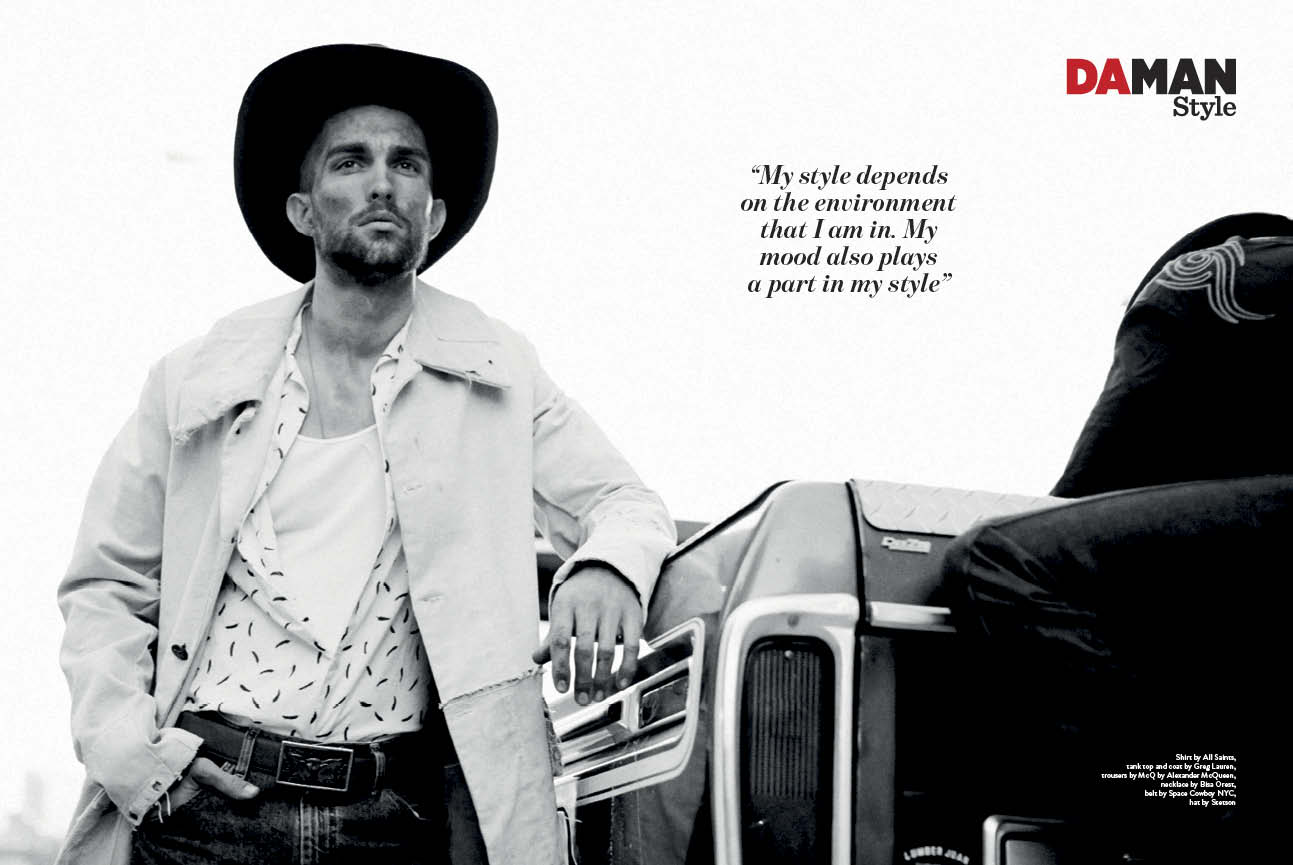 Shirt by All Saints, tank top and coat by Greg Lauren, trousers by McQ by Alexander McQueen, necklace by Bisa Orest, belt by Space Cowboy NYC, hat by Stetson

DA: What would you be if you were not a model?
TS: It’s such a difficult question that I’m often asked. Since I studied business before pursuing modeling, I would probably have ended up doing something in that field. I feel like I’ve always had a very creative mind full of new ideas. So, I could definitely see myself starting my own business. 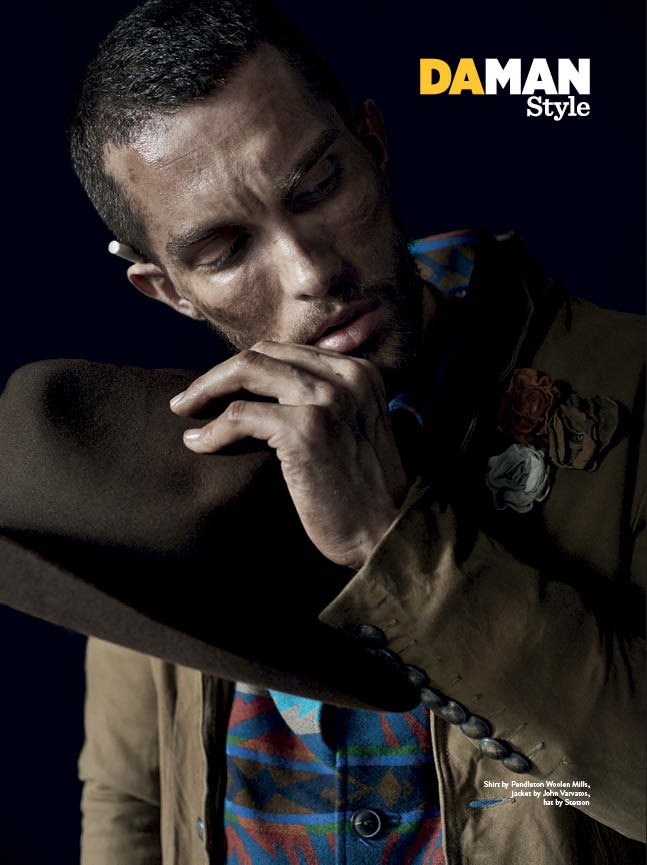 DA: How would you describe your personal style?
TS: My personal style always changes, depending on where I’m at, whether it’s a city or another country. My style depends on the environment that I am in. My mood also plays a part in my style. I can easily go from very classy to casual. 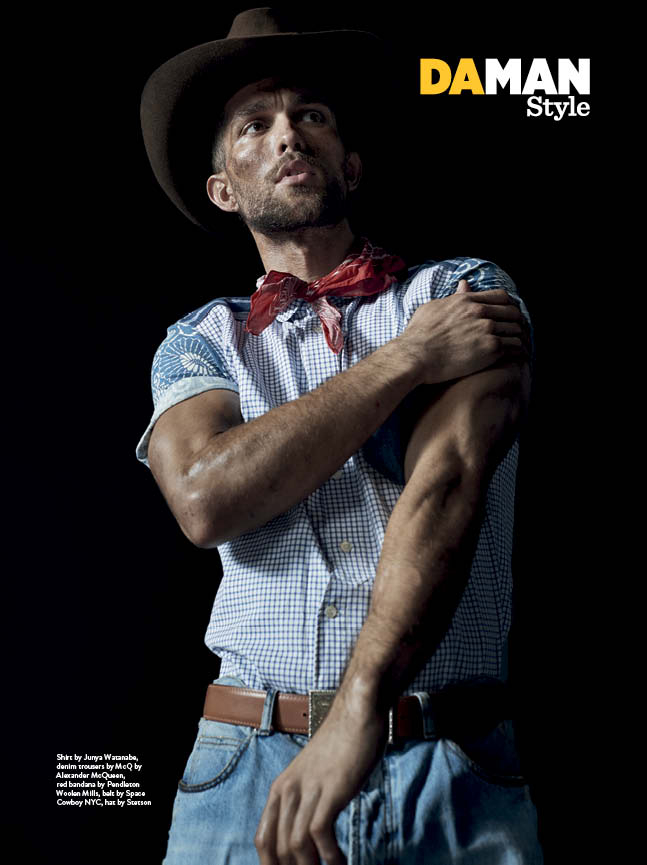 DA: And what are your favorite brands?
TS: Calvin Klein and Givenchy are my two go-to brands for a nice suit. As far as shoes go, I’m a big Nike fan. I may have more shoes than my girlfriend! Shirt by Wrangler, hat by Stetson